Monter » Blog
Engine Work: Collision Wrap-up
Chen — 1 year ago
Hey guys, sorry for the inactivity. I have been making steady progress on Monter over the past couple of months, but couldn’t find any time to do a writeup about it. I try to make these writeups as high quality as possible, so I was reluctant to publish any article that just glosses over the details. And now I finally have the time to do another writeup on Monter. There’s a lot of stuff to cover, such as the new grass system, terrain system, and water shader. But for this post, let’s first wrap up the collision system that I ... Read More →


Engine Work: Procedural Volumetric Cloud Rendering
Chen — 1 year, 5 months ago
Hi all. I know I owe you a followup blog post to the collision system, but I decided it’s best to write about the recent procedural cloud render I did while it is still fresh in my head. Here are a couple of screenshots: 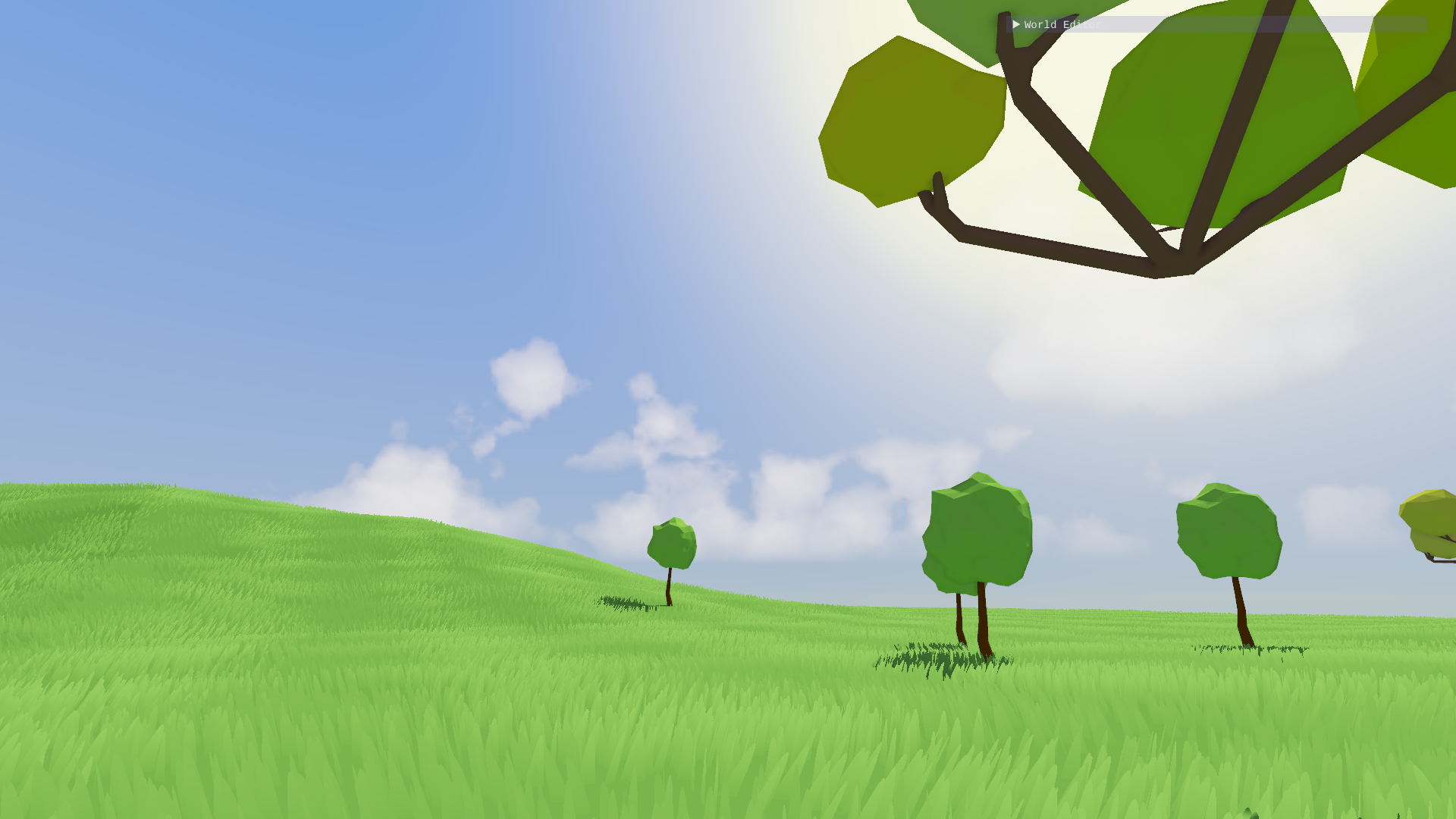 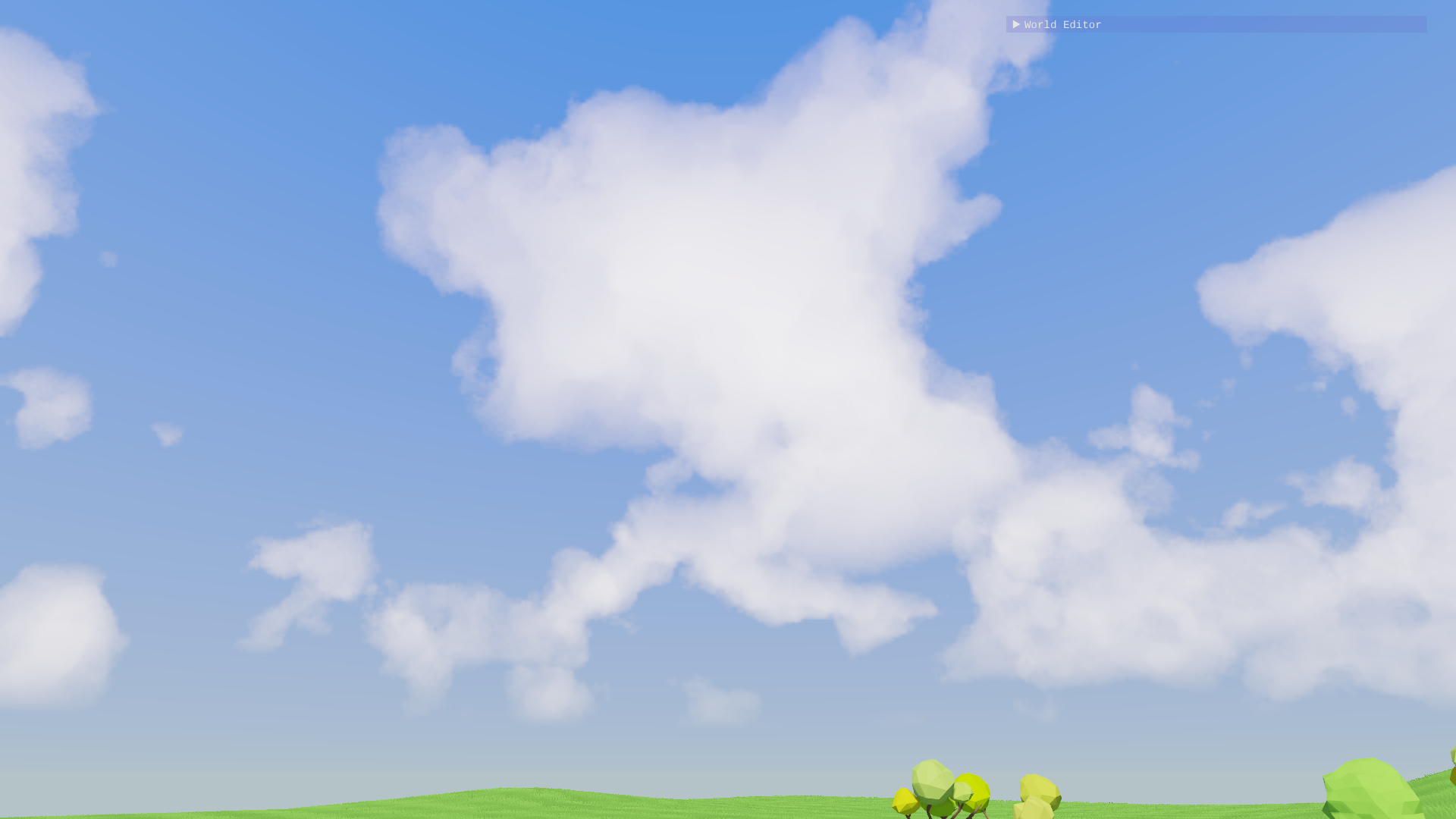 Before we get started, I just want to clearly state that this is not based on any physical equations whatsoever. This result is solely obtained by experimenting with various mathematical equations with a weak physical basis; the “look” of the ... Read More →


I'm back!
Chen — 1 year, 6 months ago
Hi all! Sorry for the inactivity. School got in the way and I wasn't able to work on Monter much in the past three months and therefore hasn't posted any new progress. But now with school out of the way, I can finally come back and work on Monter again. So, expect new updates on the reworked collision system very soon! Read More →


Numerical Robustness and New Approach
Chen — 1 year, 9 months ago
Thanks to the debugging system from last post, I was able to pinpoint the bugs fairly quickly. However, as I tweak the algorithm to improve its numerical robustness, it becomes obvious that the problem is not as simple as just making the algorithm robust. In order to elaborate my concern and problem, here’s a review of the main algorithm.

Recap of Faurby’s
As I have stated in my previous posts, the current collision system is based on Faurby’s paper, which is really just a simple swept sphere vs triangle mesh collision detection & response routine. Here’s a pseudo-code version:


Engine Work: Collision Debug System
Chen — 1 year, 10 months ago
The collision system is one of the areas worth investing time into to get rid of all the bugs and ensure it’s 100% robust. However, it is not trivial to do that. I can test it by walking the character all over the map, but that’s a lot of manual work and it is extremely likely many cases will not be caught. Furthermore, this method of testing only confirms whether or not my collision is bugged, but doesn’t help me answer why the bug occurs or how to fix it. Once the character is stuck, I lose the information of ... Read More →

So we got collision working, but its performance is unacceptable. If I load the entire world geometry up as collision mesh, the collision routine would take up to about 100ms to process per frame, that’s insane!

One well-known technique that helps with performance is spatial partitioning. As its name implies, a spatial partitioning algorithm takes a bunch of geometries and groups them in terms of vicinity. When geometry needs to be queried for collision detection, we can only pick out the geometries that are close enough to our moving character and ignore the ... Read More →


Collision System Part 1: Collision Detection and Response Against Static Mesh
Chen — 1 year, 11 months ago
In this post I will be discussing the collision algorithm I used to handle interaction between the player and his surroundings. It is based on Fauerby’s paper.

I really struggled to find good resources on collision detection and collision response so hopefully my post can serve as somewhat of a starting point if you want to implement your own collision system.

When you render a game scene, almost all the objects are represented by a triangle meshes. They help provide fine-grained details that you see on the screen. However, they aren’t always the best candidates to ... Read More →


Engine Work: Sky shading pass
Chen — 2 years ago
Hi everyone. For the past couple of weeks I have been mostly working on Monter’s movement system, but it’s still heavily WIP so I can’t write about it just yet. What I did finish though is a simple sky shading pass. It turned out quite nice because it gels well with Monter’s simple low-poly art style. So I’m going to write about that instead.

Considering how to draw a sky

Skybox has been a popular choice for many years. It’s a technique that packs the pre-rendered skydome into a cubemap, which is a texture with six faces. A cube geometry ... Read More →


Engine work: Light transmittance and memory management
Chen — 2 years ago
Hi folks, it’s been a while since my last update. Unfortunately school got in the way so my progress on Monter stagnated a bit, but I was still able to put work into it. A terrain walking system has always been my next big goal, but there were still missing pieces here and there. So I spent the past week patching them up. And after this blog post, I will finally start to work on the terrain walking system.

The only reason we can see anything at all is thanks to light. Light sources first emit ... Read More →


Progress Report: Shadow and Editor Improvements
Chen — 2 years, 1 month ago
Hi folks. I will talk about the progress I’ve made since last time and how the blog post style will be changed.

Less Emphasis on the Well-covered Subjects on the Internet

When I read my own posts from the past, I noticed they have a lot of duplicate info with popular tutorials out there. So in the future posts, I will minimize the effort I spend on talking about popular subjects and talk more about the unspoken quarks and side-effect of them.


Debugging Cascaded Shadow Map
Chen — 2 years, 1 month ago
I want to try something different for this post. Rather than just a boring rundown of the technology I implemented, I am going to write about how I approached at solving a bug in my shadow system. I think this post is a lot more down to earth than the other ones and I hope you will enjoy it.

Alright, just when I want to take a shot from a different angle to show off my new assets, my shadow map broke. You can clearly see the huge gap in shadow on the right of this ... Read More →


Game Engine Review: Rendering Pipeline
Chen — 2 years, 2 months ago
As promised, I will be a doing a full review of the game engine in its current state. This blog is dedicated to the renderer in my game engine. I will provide you with a high-level overview, how the renderer came about, and some interesting implementation details. 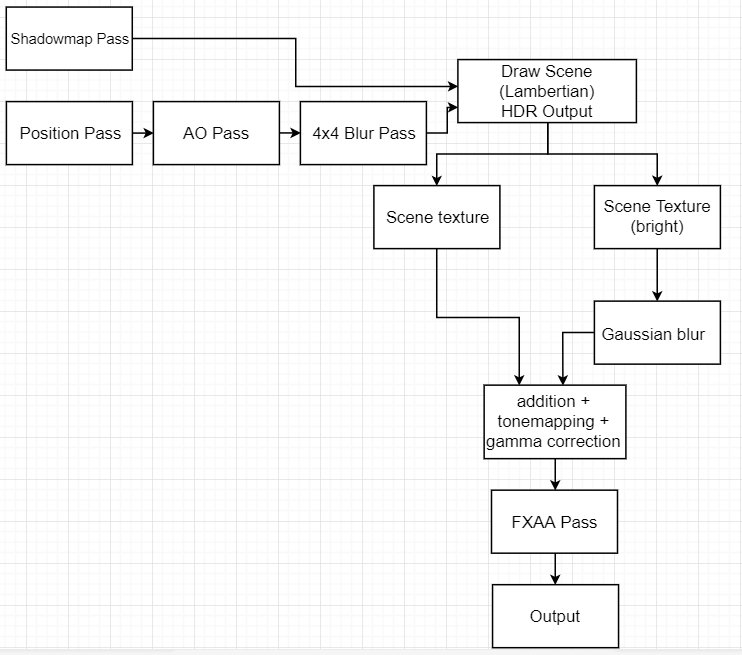 Like every other game, Monter’s rendering pipeline is not just a simple draw call. It involves precomputing textures such as shadow maps and ambient occlusion textures to help enrich the visual scene when the actual rendering starts. It also has a post-processing stack which helps smooth out the jagged edges and emulates ... Read More →


Game Engine Review: Shader Managment
Chen — 2 years, 1 month ago
Hi everyone. This is post is just me picking up where I left off from last blog post, so it's gonna be a short one.

It is often the case that temporary shaders are written for debugging purposes and need to be added and removed frequently. Same for merging shaders to speed up rendering and splitting shaders for more reusability. If we just build shaders separately and store them in their own files, managing those files and editing the code that build and store the shaders become an unpleasant hassle very quickly. Unable to bear this chore, I set out ... Read More →


Progress Report: Shadow Mapping
Chen — 2 years, 2 months ago
Hi everyone. It’s an honor to be featured by handmade network. I will be pushing out blogs where I talk about the challenges I face during Monter’s development. I’ve been thinking long and hard about what to write about on a first blog. The best choice seems to be writing a review of what I’ve done for the game engine so far, but I’ve just finished shadow mapping, so I decided to go with it this time because it’s still fresh. A review of the entire engine will probably be the topic of my second blog, so stay tuned.